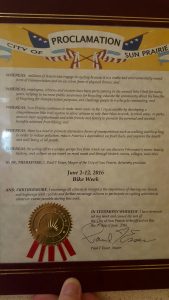 Thanks to everyone who attended the city council meeting tonight. During the meeting Mayor Esser presented a City of Sun Prairie Proclamation of June 2 to June 12th being Bike Week in Sun Prairie. The Proclamation reads:

Whereas, millions of Americans engage in cycling because it is a viable and environmentally sound form of transportation and an excellent form of physical fitness; and

Whereas, employees, citizens and visitors have been participating in the annual Bike Week for many years; helping to increase public awareness for bicycling, educate the community about the benefits of of bicycling for transportation purposes, and challenge people to try bicycle commuting; and

Whereas, Sun Prairie continues to make more areas in the City accessible by developing a comprehensive bike trail system to allow citizens to ride the bikes to work, to retail areas, to parks, around their neighborhoods and with friends and family to promote the personal and societal benefits achieved from biking; and

Whereas, there is a need to promote alternative forms of transportation such as walking and bicycling in order to reduce pollution, reduce America’s dependency on fossil fuels, and improve the health and well-being of all people.

Whereas, bicycling offers a unique perspective from which we can discover Wisconsin’s scenic beauty, history, and culture as we travel on rural roads and through historic towns, villages, and cities.

And, furthermore, I encourage all citizens to recognize the importance of sharing our streets and highways with cyclists and further encourage citizens to participate in cycling activities to whatever extent possible during this week.

Don’t forget the ride on Thursday. See you at 6pm.